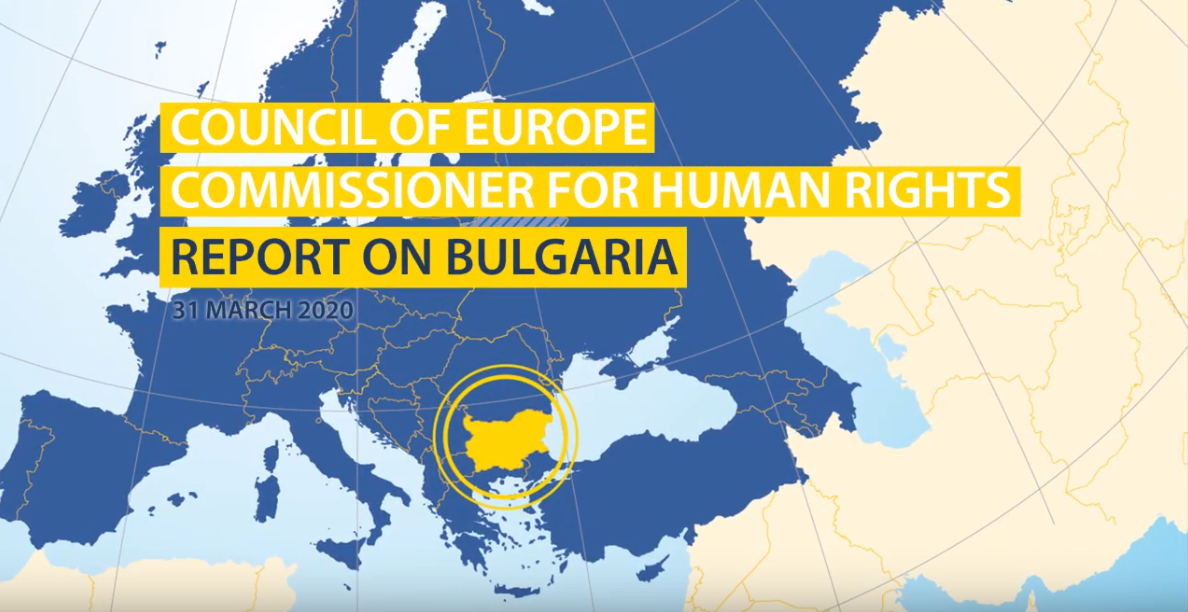 Today the Council of Europe Commissioner for Human Rights, Dunja Mijatović, published a report on the visit to Bulgaria she carried out in November 2019. The report focuses on racism, intolerance and discrimination; violence against women and domestic violence; and media freedom.

The Commissioner considers that there is a need for a political and cultural shift in the way minority groups are treated and portrayed in Bulgaria, where hate speech, discrimination and hostility against Roma, LGBTI people and persons belonging to other minority groups remain an issue of acute concern. She calls on the authorities to react vigorously to incidents of hate speech, including by high-level politicians, enhance legal protection against discrimination and hate crimes, and effectively investigate and prosecute such crimes.

The Commissioner deplores the climate of hostility against Roma, in particular against those who had to leave their homes following rallies targeting their communities in several localities. She calls upon the authorities to urgently address the situation of the persons affected and to act swiftly to strengthen the legal safeguards accompanying evictions. Resolute measures should also be taken to improve the general housing situation of Roma, including their access to social housing.

Commissioner Mijatović is concerned that the debates surrounding the Istanbul Convention have escalated into worrying trends which pose serious threats to the human rights of women, children and LGBTI people. “The ongoing attacks against NGOs, the withdrawal by the government of the Child Protection Strategy and the postponement of the entry into force of the new Social Services Act are among the most regrettable examples of these developments”, she says. “The authorities should change course. They should confront harmful narratives, improve legislation and raise public awareness about the need to enhance the protection of victims of violence against women and domestic violence. Particular attention should be paid to promoting equality between women and men”, says the Commissioner.

A further issue of concern is that the services available to victims of domestic violence are insufficient and do not adequately cover all regions of Bulgaria. The Commissioner therefore calls on the authorities to increase the number of shelters and other social services necessary to victims of domestic violence. She also recommends a set of measures to improve the authorities’ efforts to combat violence against women and domestic violence. “Stronger support to the work of the NGOs and human rights defenders active in this field and systematic collection of data on all forms of gender-based violence against women are needed. The authorities should impose dissuasive sanctions on perpetrators, guarantee victims’ access to free legal aid and easily available protective measures and provide victims with effective remedies”.

The Commissioner’s report also highlights the continuous deterioration of media freedom as a consequence of a series of aggregate factors, including non-transparent media ownership and financing, harassment of journalists, the use of defamation suits and political influence. Stressing the importance of a free and pluralistic media for the proper functioning of democracy, Commissioner Mijatović calls on the authorities to foster a favourable environment for freedom of expression, in particular by preventing the excessive concentration of media ownership, repealing criminal provisions against defamation offences, and punishing all perpetrators of threats and attacks on journalists.

Lastly, she calls on the authorities to improve journalists’ professional protection and working conditions and make the composition and mandate of the Council for Electronic Media more independent and effective.